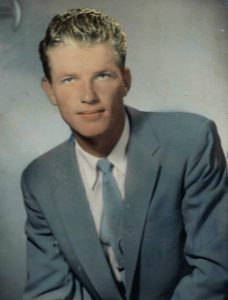 Almost two weeks ago on the morning of Monday, August 13th, my mom came into my room as I was recovering from sleep. My mom forgot to tell me that we were expecting my Great Aunt Sandra and Great Uncle Edward to stop by.

She lifted a picture for me to see and told me, “This is a picture of Uncle Edward,” my mom told me.

I chuckled and thought to myself that old man… as I often called him.

After my daily routine shower, getting dressed, and getting situated in my wheelchair, I came to greet my aunt and uncle in the living room.

“What do you think about the picture?” my uncle asked.

“Well, I did not even recognize you!” I replied.

He exclaimed, “I told you that I was handsome like Uncle Perry.”

Perry is my second cousin—his son. Perry does look a lot like his dad in this picture!

We enjoyed our hilarious conversation and as it came to a close he said, “I will see you, soon. Maybe in a week or two. ”

“Sure! Looking forward to seeing you soon!” I smiled.

He smiled back and said, “I love you and I always pray for you and Tyson,” as he waved goodbye and left for the day.

Uncle Edward always keeps me laughing. A sense of warm familiar love wraps around me when they visit. I feel accepted.

However, a few days later I received dreadful news. My mom told me that Uncle Edward had passed away.

Stunned. Unbelievable. I just saw him. Joked with him. Laughed with him. Now… what happened?

Tears welled up in my eyes and shock was setting in. I could not process this news so the tears would not fall. I thought about every detail of our last conversation throughout the day.

Later on I asked my mom, “What did he do with that picture you showed me?”

“What… really?! I did not realize he gave it to me,” I said in disbelief.

“Yes, he asked me if you wanted it and I told him you would!”

Touched by the gesture of love, his profound love reverberated through my soul.

Reminiscing on my childhood years, I remember eavesdropping on a conversation he was having with my brother, Tyson. Judy, Tyson’s nurse, was interpreting the conversation between Uncle Edward and Tyson. Slyly, I watched from across the room.

Uncle Edward was telling Tyson a story about my grandfather as a young man, then randomly he started imitating a rooster.
“Cock-a-doodle-dooooo!!”

I couldn’t help but crack up when I saw his words come off of Judy’s hands. And for some reason I could hear it.

I could see on the other side of the room that his wife was growing in embarrassment. She pulled at him to try to get him to stop and she turned as red as a tomato which had me laughing even harder.

We made so many wonderful memories each time they came for a visit. Their warm presence was something I cherished.

While I was on my way to the funeral, the van broke down. We had to turn around and thankfully we made it home safely.

One of the speakers charged, “Grieve. But never grieve without hope.”

I was reminded of Jesus’ love and mercy throughout my Uncle Edward’s service. The greatest message of the funeral was to fervently share the gospel, the Word of God, while here on earth.

Funerals are a sobering reminder of our ever-present need for Him.

I will always remember Uncle Edward as a faithful man of God, devoted to his wife and family, and always loving and caring for those dear to him. I will miss him greatly—the world will never be the same again. However, hope remains. 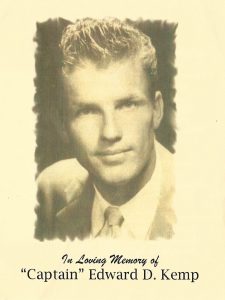 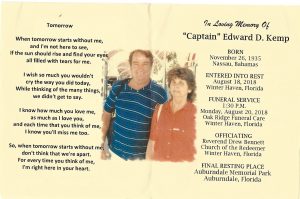 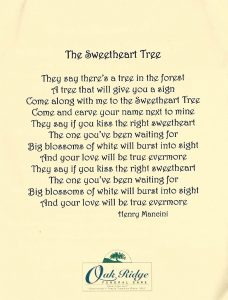