Inspired by an underwater photograph taken in the Bahamas that Paige love. She used acrylic paint with a strainer that she held in between her teeth. The background is made of a collage of layered paper and the coral layers were made with stencils and molding paste on transparency film.

SUMMER IN THE ARCTIC

This painting was inspired by God’s beautiful creation, Paige’s love for snow, animals, and colors of the sun kissing the ocean. The animals dance in the pure white snow enjoying the light of summer. She loves the look of the stark contrast between the dark ocean and the fierce white snow.

Paige LOVES picking bright colors and seeing how they melt into each other. This piece was done by pouring paint through a funnel (or a strainer) held between her teeth. Drip art quickly became one of Paige’s favorites because of the mystery of how it will turn out. Paige’s free-flowing mindset is depicted in this piece, Melting Colors.

This stained glass piece was created to submit to an art contest at the Tampa Bay Lightning’s stadium and was on display for the 2015-2016 hockey season. The picture depicts the Amalie Arena from the harbor during a thunderstorm. The tall buildings of Tampa are shown in the background, and a cruise ship is about to cross in front of the stadium. Paige’s friend who is a die hard Lightning fan encouraged her to do this piece of art.

Paige gifted this painting to her Mother’s Day in 2016. At 52in x 52in it is the biggest painting she has ever done. Paige wanted to do something special for her mom that was unlike anything else she had done before. It was done by pouring paint through a funnel held between her teeth.

FOR BY HIM ALL THINGS WERE CREATED

This painting is very different from all the other artwork Paige has done. This came naturally to her. For the humming bird and flowers, Paige used stencils. As for the background, she tore three different colors of paper in various sizes and pasted them to the canvas. Lastly, Paige chose a verse that matched the story of the picture.

This painting was inspired by Paige’s original poem.

I dance in the churning storm
Holding the sword of truth high above
In my weaker hand I wield the whip of hate and anger.
Lightning strike! Thunder boom!
Before my feet arose the fog of trepidation.
Flame blast forth
Stretching across
The field of the unknown
Where God has placed my path,
Which I have no choice but to face
What I love and hate.
The tingling sensation to cower and hide
Explodes through my veins
Even though I carry the sword of truth.
The sound of the crackling whip of hatred wages
Powerful emotions
Through every part of my being
In spite of this
I must stand my ground.
When will be the time I break through the fog?
Speeding forward
Through the field of unknown
Toward the blazing fire of my destiny.
Will I be able to challenge and fight the trials that are set before the glowing path
While my body is unarmored
Guarded only by truth and hate
Yet Jehovah-Shammah will always be there to comfort my aching heart with his radiant love. 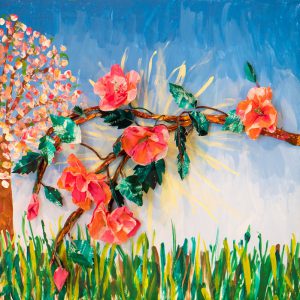 Paige was inspired to enter a new dimension with her art work- 3D. Her cherry blossom skillfully projects out and creates an entirely new way to enjoy art. Paige used Q-tips, sticks, tissue paper, and paint brushes to complete this piece. This piece is displayed in a dear friend’s home in the Bahamas.